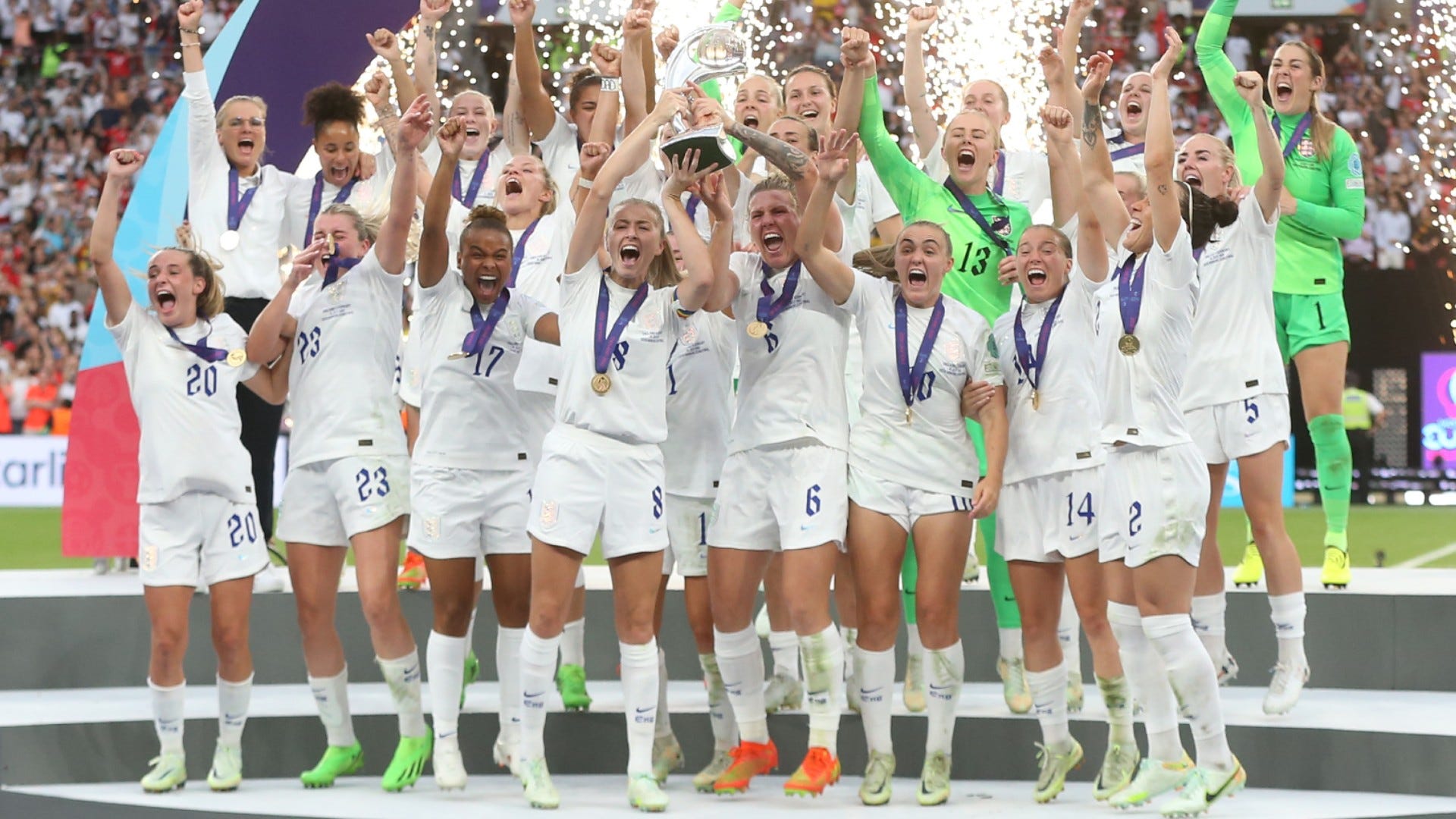 It was the day before the 2022 Women’s Euros final and Svenja Huth was the player put up for Germany’s pre-match press conference. As she took her seat at the top table, she looked ahead and saw a room packed with media – not a single seat spare. She grabbed her phone and took a picture.

Huth has won the Euros before, she has won two Champions League titles and an Olympic gold medal. But even she was taken aback by the sight.

It was a moment that perfectly encapsulated what a defining summer it has been for the sport.

There has been a lot of talk about what this record-breaking tournament could do for England. After they beat Germany in the final, thanks to Chloe Kelly’s extra-time strike, there is even more excitement about what is next for the domestic game.

The hosts have drawn the biggest crowds – including the record-breaker in the final – and the perception of the Lionesses in the eyes of the public has changed massively over the course of their run to the final.

Murals have been painted up and down of the country of the players. Beers have been named after them. There are football fans all over England with the names of these women on their shirts.

Before, it was common to see young girls with Lucy Bronze or Fran Kirby printed on their backs. Now, you see people of all ages sporting as much, with men in pubs singing ‘Beth Mead’s on fire’. This hasn’t happened before.

“I think what we’ve seen is that this hasn’t just been a change for women’s football, but society in general,” England captain Leah Williamson said on Saturday, the day before final. “Tomorrow is not the end of the journey, but the start of one. We’ve really started something. I want this to be a mark for the future.”

But it is not just in England where things should change.

Record television audiences have been seen all over Europe, with millions tuning in to watch their respective nations compete in the continent’s biggest competition.

The press boxes even for games involving less-developed nations in the sport have been packed, with coverage of the tournament more wide-reaching and comprehensive than ever before.

The number of travelling fans has been immense, too.

Before the tournament, Kayleigh Grieve, who works in women’s football marketing and sponsorship at UEFA, spoke to the Footballco Business Podcast about criticisms of the size of the event’s stadia.

“We also haven’t quite got to [a point yet] where we have huge travelling fans behind women’s football,” she said, outlining the factors behind the choice of venues. “I think the Women’s Champions League final was the first time we saw with Barcelona, a huge swathe of people coming to an away game and travelling for that.”

This summer has seen a huge change in that respect. Each nation has always had its dedicated fans, but the numbers have grown massively this time around.

The yellow of Sweden has taken over whole streets, the Netherlands’ party bus made its way to England as it did to France for the 2019 World Cup, and Iceland fans turned the Manchester City Academy stadium into – as the family of one player described it – the team’s own little home.

It means we have seen record after record broken. The figure for the highest attendance for a non-host game at the Euros was initially smashed on the third day of the tournament, as Spain beat Finland, before being bettered three more times – the Germany vs France semi-final crowd now holding the record. It took just nine days for this to become the most attended Women’s Euros of all time, too.

Yet, there is still room to improve. Arguments over the size of stadia have rumbled on throughout the summer and will no doubt have an impact going forward, with the host of the 2025 edition still to be decided.

When the venues were picked in 2017, choosing smaller grounds might have seemed appropriate for where the game was then, but the progress has accelerated in such a way that some players were struggling to even get tickets for their families this summer.

The development will only continue at that rapid rate now, but it should not just be at this highest level. It should not just be that when the World Cup comes around next summer, or the Euros return in three years, that people get excited. This moment should be capitalised on to improve the women’s game as a whole.

Imagine the impact that Belgium’s historic run to a first quarter-final could have, for example. The star of their tournament was Nicky Evrard – a goalkeeper who is still not a full-time footballer.

Even Germany, the eight-time European champions, have a league that is still not fully professional. Some grounds in the Frauen-Bundesliga don’t even have scoreboards.

England might have had a sold-out Wembley Stadium cheering for them on Sunday, but the Women’s Super League is still looking to hit average attendances of just 6,000 by 2024.

This tournament should be celebrated for the success it has been, of course. But it should also serve to highlight some of the shortcomings that exist on a day-to-day basis in the women’s game.

“It’s not just an event that’s here and everybody is happy about it. Something has to continue,” Germany head coach Martina Voss-Tecklenburg pondered. “There has to be the chance for countries to make the next steps in women’s football.

“If not now, when will it happen?”