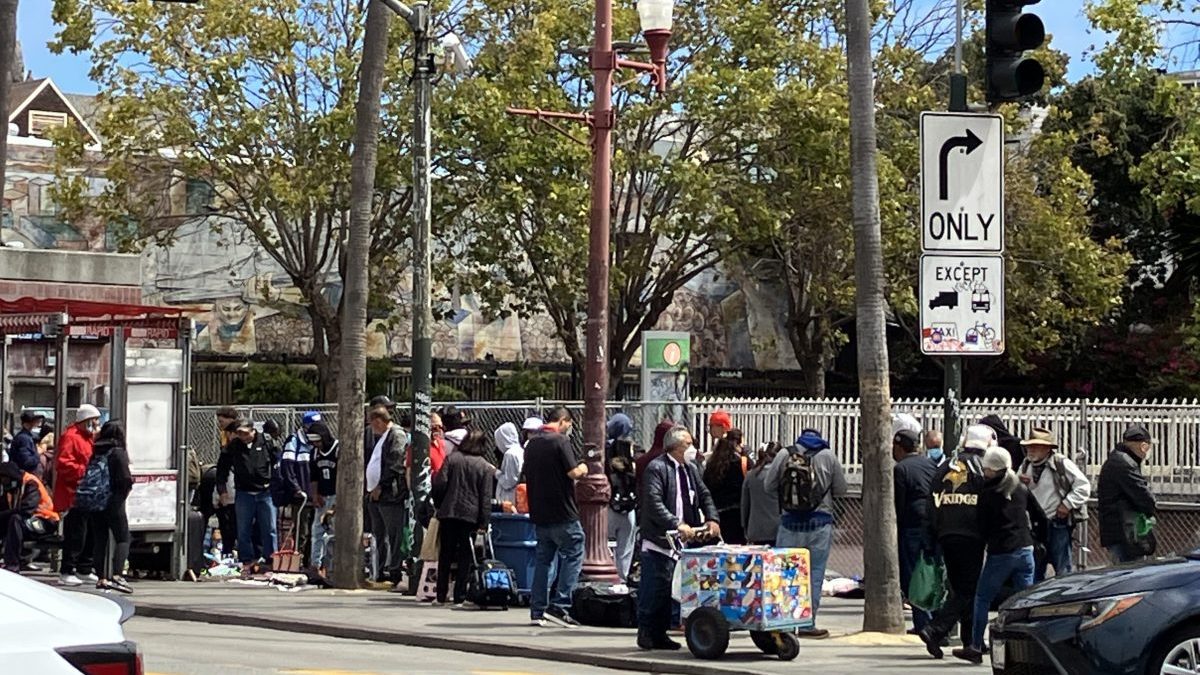 While the southwest plaza appeared tidy, the northeast plaza still had crowded vendors

On Wednesday BART erected a fence surrounding the 24th Street BART plazas, at the behest of Supervisor Hillary Ronen, who has been on a campaign to prevent overcrowding and illegal vending.

One day after its installation, many vendors are unmoved.

The northeast plaza, where the majority of illegal vending and crowding issues occur, remained fenced off. But some 10 vendors lined up just outside the fence, congesting the sidewalk, just as it had been earlier. In contrast, the southwest plaza appeared orderly and tidy. Mission Local visited both multiple times during the day.

As early as 8 a.m., one reporter spotted at least five folks setting up shop along the northeast sidewalk, an area that is supposed to remain clear – a requirement of the Americans with Disabilities Act. Only when Public Works staff and police officers arrived at around 1 p.m. to enforce the disability law did two or three vendors pack up their merchandise in suitcases and pushcarts and scuttle away. About 7 to 10 vendors remained, purportedly waiting out their enforcers and leaning along the fence.

“These people are waiting for the police to leave,” said Santiago Lerma, a legislative aide for Ronen. Still, Lerma visited the plaza Wednesday night, and he believes that fewer people were “hanging out” than before thanks to the fence.

Ronen said she didn’t expect much progress after just one day. She hopes, however, that routine enforcement led by city staff will eventually restore the plaza to the “vibrant…passable” area it used to be.

“It’s an iterative process, and we’re acting as it happens,” Ronen said. “Right now I know [vendors] are on the outside of the fence. That can’t be.”

Public Works staff are scheduled to visit the 24th Street plaza twice a week to enforce the ADA law, said Lerma. Police officers will also be present when Public Works asks vendors to leave, though Public Works will lead enforcement operations. “This is a community space used by elders and children. We want to make sure everyone feels safe,” Lerma said.

“We’re not trying to criminalize any vendors,” Ronen said. “We want to get to what we had before: Where people from all over Latin America were selling all their goods [like] paletas and pupusas, and people could get to the bus stop unimpeded.”

Ronen’s office is also in discussion with Mission Street business owners who may open their shops to host an “indoor flea market” to help out vendors who desire a fixed place to sell.

The fence sparked controversy among some in the neighborhood. Some called the fence a barrier to a vibrant public space that deprives longtime vendors of an income source. Others lauded the supervisor for addressing the plaza’s unsafe conditions. The 10 vendors lined up at the northeast plaza at 11 a.m. sold everything from bongs to vintage video cameras.

On the northeast plaza, police officers cleared vendors selling open cans and bottles of alcohol at the bus station on Mission Street. Susana Rojas, the executive director of Calle 24, was on site with her staff, reminding officers to not be harsh while removing people.

“We want to make sure vendors with licenses aren’t impacted,” Rojas said.

By 1 p.m., two Public Works staff in yellow vests approached and began gently asking people to move their belongings from the sidewalk. Two police officers, one who spoke Spanish, also monitored the situation and asked vendors blocking the path to move. The sidewalk, indeed, became clearer and “passable” unlike the earlier morning scene. How long that would last was unclear.

Some vendors on the tidier southwest plaza said they were grateful for the fencing.

Lourdes was one of the vendors at the southwest plaza pushed to the sidewalk when the fences went up Wednesday. On Thursday, she was closer to the sidewalk with less space for her tamale table, but nonetheless, she was happy. The fence had brought more clients to her business.

“We’re happy because it looks clean,” she said in Spanish while glancing around the fenced-in plaza. “People feel better to come and shop.”

Lourdes was accompanied by four other vendors who have been selling in the area for years. She said vendors, including herself, should be flexible in complying with the city’s orders. “We don’t have any problems with adapting to this new situation,” she said. “[The city] wants to help us.”

Nearby, Millie, who has been selling jewelry on the southwest plaza for eight years, said the fence makes it safer for everyone, especially vendors with business permits, like her.

“I hope they can keep the fence,” she said. “I don’t need to check who’s behind me. There are no more homeless people using drugs or using the bathroom.”

Hours before opening up shop, Delia, another vendor who sells a variety of beauty products, received her business registration certificate from the Office of the Treasurer and Tax Collector. She said she feels better having a city certificate in her possession so she can show it to Public Works and the police.

These certificates, however, differ from the new permits that Ronen’s vendor law will create, which will be checked by Public Works staff. Ronen will use the vendor law to crack down on illegal sales in the future, but Public Works has so far failed to launch a permit system that would allow it to be enforced. The system is expected to launch in mid-August, Ronen said.

Despite concerns that large groups of vendors and illegal activity would shift to lower Mission hotspots like Mission and 18th streets or the 16th Street BART Plaza, Mission Local did not yet find that to be the case on Thursday. Ronen and BART Director Bevan Dufty said on Wednesday that if similar poor conditions occurred at 16th Street, a fence could go up there, too.

Still, that won’t stop some vendors from playing a cat-and-mouse game. Back at the northeast plaza at 1:15 p.m., one vendor by the bus shelter started closing up shop after recognizing Lerma sipping a coffee and chatting with a police officer. The vendors’ offerings of shampoos and toothpaste were conveniently packed in two suitcases. “I leave when the city talks to us,” he explained in Spanish. When asked where he goes, he replied: “To 18th and Mission.” Then he comes right back.