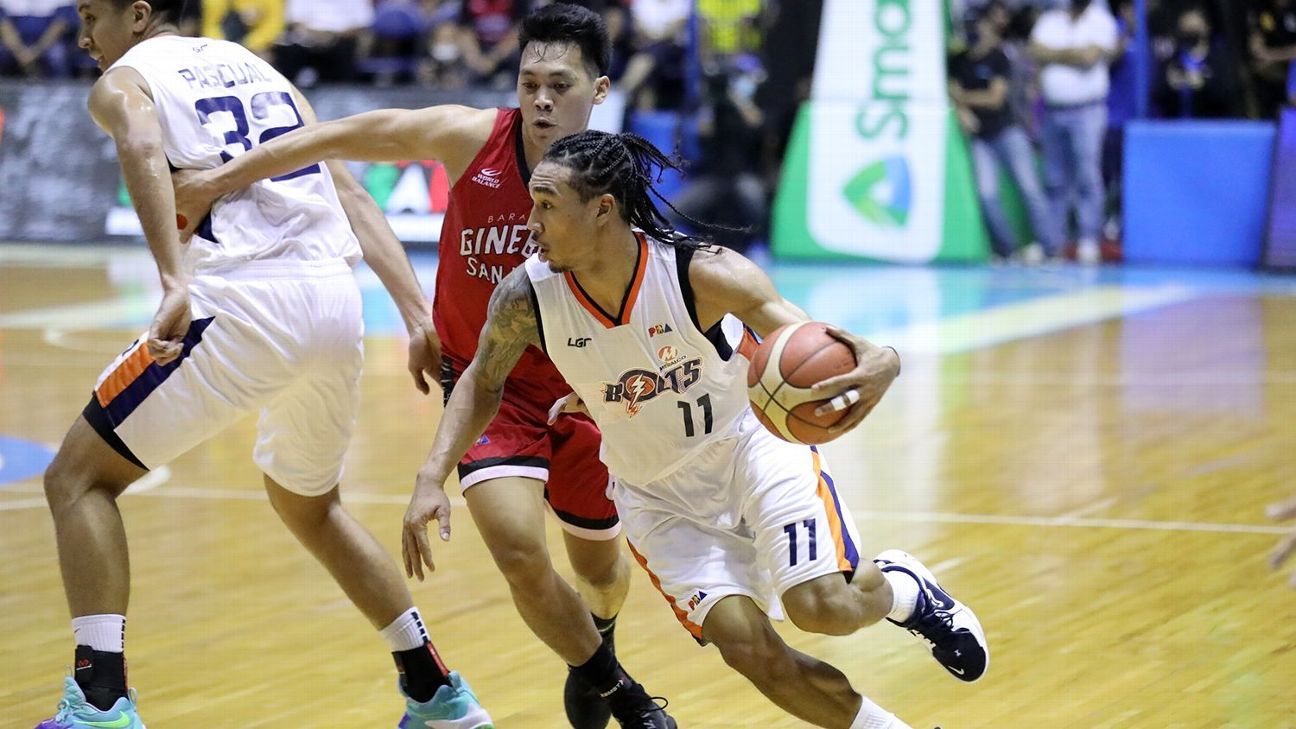 The fifth-seeded Meralco Bolts took a crucial 93-82 victory over fourth seed Barangay Ginebra in Game 1 of their 2022 PBA Philippine Cup quarterfinal series to move within a win of the semifinals.

With plenty to unpack from the result, here are three thoughts on Sunday’s game:

The Bolts lost in six games in last season’s Governors’ Cup Finals where Justin Brownlee as usual went nuclear on them. In the 2020 Philippine Cup bubble, Scottie Thompson’s corner triple in the deciding semifinal Game 5 stuck a dagger into their hearts. Of course, Brownlee started it all with that buzzer-beating three in 2016.

Simply put, the Bolts have never beaten the Kings in a playoff series, and this is the closest they’ve ever been to finally getting the monkey off their backs. They have two chances to get the job done, a position they’ve never been in against the Kings.

“I don’t think we want to avoid Ginebra at all. When it comes to a playoff series I think everyone here would want the challenge.

“And until we overcome that challenge I think it’s nice that we just keep battling out. And we actually keep getting chances, and we look at this as another opportunity to overcome and climb that mountain.

“The rest of the guys feel the same way and we’re always hungry to battle Ginebra. Of course, they’ve got the fans, their 6th man, and of course they’re a championship team. And that’s what we want to be.

“We know we’re going up against a champion team,” added acting head coach Luigi Trillo. “They’ve beaten us every series. But it’s just one game.

“We need one more game. So as much as the guys played well, we know what Ginebra’s about. They’re gonna come back hard in the second game. We just need to go back to the drawing board. See what other things we can do, try to get them uncomfortable.

“We have a lot of respect for them all around the board. (Stanley) Pringle, (LA) Tenorio, Nard Pinto, (Christian) Standhardinger, (Japeth) Aguilar. The list goes on and on. So at this point the nice thing for us is that we have three days to regroup.”

Meralco on the rise, Ginebra sputtering

These two teams are trending in opposite directions. The Bolts may be the lower seed in this series, but they’ve been the better unit over the past few weeks. Meralco has won six of its last seven, and has now beaten Ginebra twice in the last two weeks.

Meanwhile, Ginebra has lost three of its last five games. The two wins came against teams that are no longer playing in the Philippine Cup. The three losses have all been by double digits. The Kings have had to deal with some adversity. Aguilar, for instance, is still recovering from dengue. He reportedly still gets easily tired and gets foggy vision.

Game 1 was a perfect depiction of the current state of these two teams. The Bolts led for 40 of the game’s 48 minutes, including the last 36. Aside from Newsome, they got big games from Aaron Black and Allein Maliksi. They constantly hit the open man. They held Tenorio scoreless.

Trillo had to double-check the stat sheet when told about what they did to Tenorio.

“Was he zero tonight? Well, LA is key. You’re not gonna see that from LA. He’s the Iron Man. Our last series in the finals, he dominated us in that last game.”

“We’re really sharing that ball and we’re really doing it as a team and that’s what we gotta do to win it,” Newsome said. “It’s really nice whenever we got that ball moving around. You got different guys hitting from all over the court. It makes it hard for them to guard. You don’t really know who to scout because everyone’s going at that point.

“That’s just how we play in Meralco. We don’t necessarily have that one guy who can be ‘the guy’. It can be anybody’s night on any given night. AB had a great game, Allein had a great game, and a lot of guys came off the bench and contributed in their own little way without scoring points. You had KP (Kyle Pascual, who made a surprise appearance) coming into the game and got some crucial rebounds. For us, it’s just we gotta do what we need to do to get a win and everybody doing their part.”

While Ginebra has Tim Cone back, Meralco is still without Norman Black, who is in the United States following the death of his mother. Trillo, the only other person on either bench aside from Cone and Black who has won a PBA title as a head coach, has been calling the shots for the Bolts. But he insists it’s been a group effort.

“Just a lot of minds coming in, chipping in. We had to get our guys together to discuss that. And Coach Norm, I’ve been talking to him over the phone so he has his inputs.”

Trillo has ties to both benches, having served as Cone’s assistant for 12 years.

“I was with Coach Tim for 12 years in Alaska,” he said. “With Coach Norman, eight years. Both great guys. They’ve influenced me a lot.

“Obviously when you come up against someone like that you feel good. He’s been there, he’s done that. He’s won 24 championships. I’m thankful, I’m grateful. But at the same time I’m doing this for Coach Norman, too. He’s meant a lot to us. Hopefully he can join us soon.”

The Bolts will savor this win, then use the next four days to prepare as they try to finish off the Kings on Friday.

Trillo knows it won’t be easy, adding: “We have to be ready for their energy. We know they’re gonna come out and do something to get us off-balanced. I don’t think Ginebra’s just gonna roll over and die. They’re the never-say-die team.”