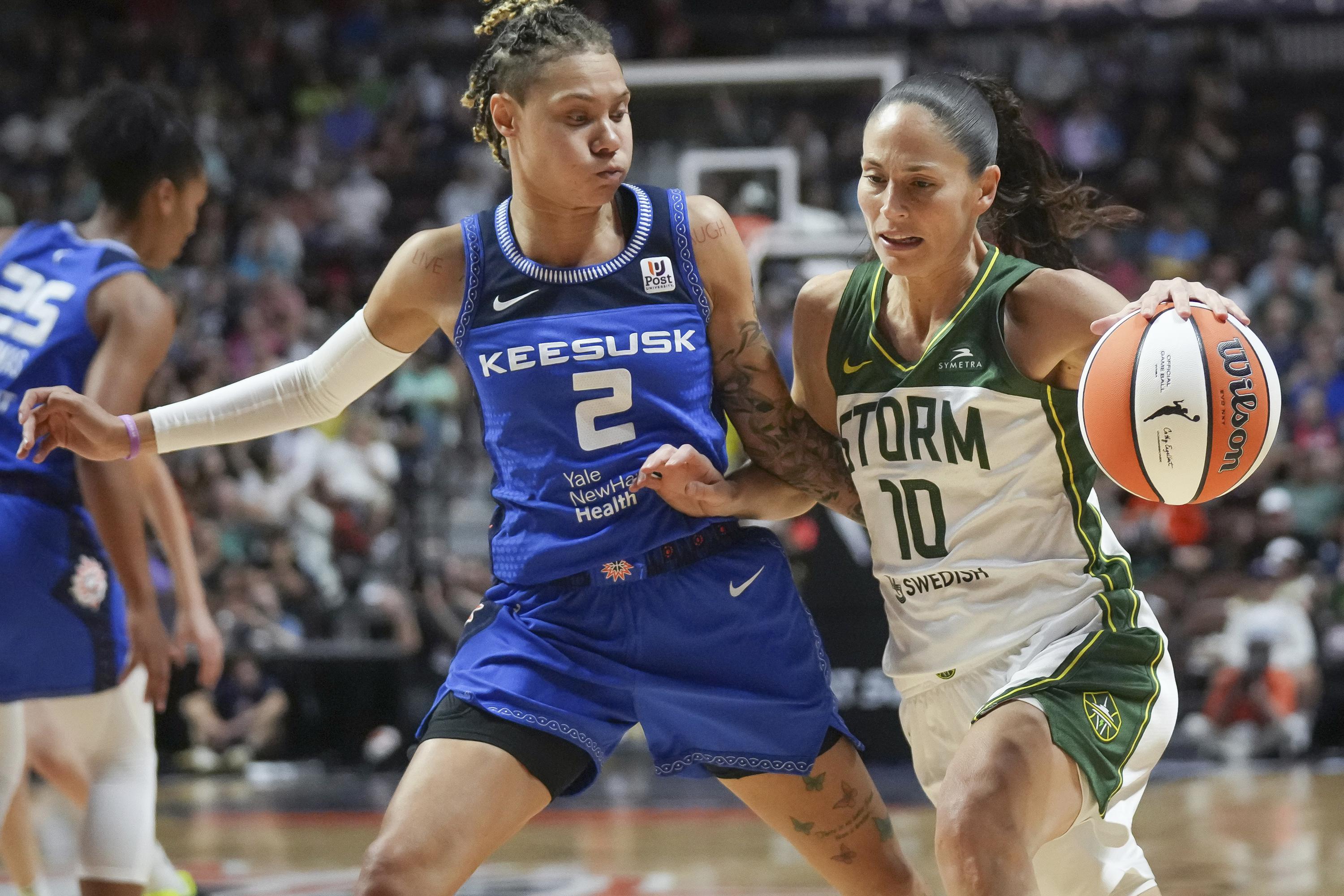 UNCASVILLE, Conn. (AP) — It was officially Sue Bird Day in Connecticut on Thursday, but the former UConn star’s last scheduled night playing in the state was spoiled by the Connecticut Sun.

Alyssa Thomas scored 19 points and dished out 11 assists to lead Connecticut over the Seattle Storm 88-83.

Brionna Jones added 13 points, and Courtney Williams and DeWanna Bonner each had 12 for the Sun (20-9).

The 41-year-old Bird finished with 14 points and seven assists for the Storm (18-11) in front of a sell-out crowd that included many fans wearing Sue Bird and UConn gear.

“A lot of times as a UConn player, I feel like the fans look at us like family,” Bird said. “And they stay with us through our careers. That’s something that I treasure, something I’ve really enjoyed every time I came back here. So, tonight was a perfect way to end that. I would have preferred a win, but I’ll take it.”

Bird, who plans to retire at the end of this season, hit her first two shots of the game — both 3-pointers — and had eight points in helping Seattle to an early 18-8 lead. The Storm led 24-21 after a quarter.

But Connecticut closed the first half on an 11-3 run. A one-handed set shot from Thomas gave Connecticut its first lead just before halftime and Connecticut went into the break up 44-40 and led 72-68 after three quarters.

Williams tied the game at 83 with a steal, a nice spin move and a layup. But Natisha Hiedeman hit a 3-pointer at the other end for Connecticut. Neither team could hit a shot from the floor over the final 2:42, with Stewart missing three for Seattle and Connecticut held on for the win.

The game was played in front of 9,137 fans, the first sellout in Uncasville since the 2019 WNBA Finals and many were there to see Bird. They gave the 41-year-old a standing ovation during a pregame ceremony and another during player introductions.

Stephanie Brune, 28, of Lakeville, Massachusetts, wore a goat’s-head hat, complete with horns, and said she considers Bird the greatest of all time.

“She’s a pioneer for our age group,” Brune said. “She’s a leader through and through and she’s phenomenal.”

Connecticut gave Bird several gifts, including a selection of books curated by her sister Jen, who owns a book store in nearby Greenwich, and a 2002 vintage bottle of wine.

Bird played 30 miles north at UConn from 1998-2002, leading the Huskies to two of the program’s 11 NCAA championships. Her former college coach, Geno Auriemma, watched from a sky box.

“(Bird) is a trailblazer, whose tenacity has elevated the sport of basketball. Connecticut is proud to be part of her journey,” he tweeted.