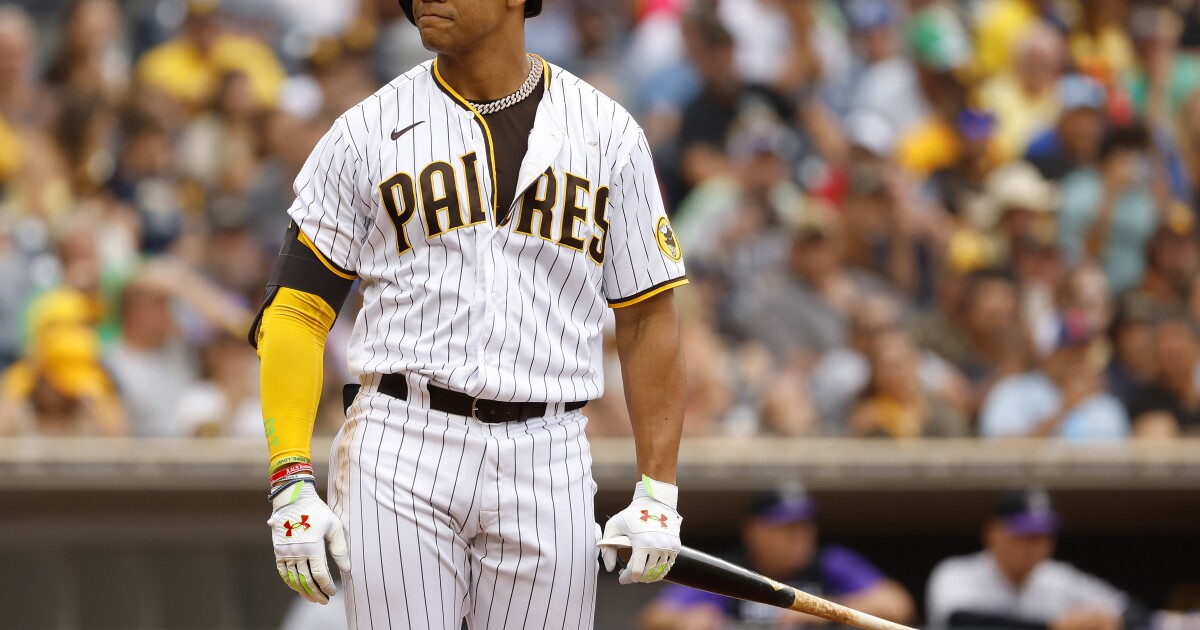 Joe Musgrove failed to complete five innings for the first time this season, the Padres’ overhauled lineup failed to score in the first five innings and a comeback fizzled in a 7-3 loss to the Rockies on Thursday at Petco Park.

The loss ended a five-game winning streak by the Padres, who were seeking the first five-game series sweep in franchise history. They’d never even won four games in their previous 11 five-game series when their deadline acquisitions — headlined by Juan Soto — seemed to help them power through Tuesday’s doubleheader sweep and on Wednesday overwhelm a Colorado team that had won eight of the first 11 meetings this season.

But the misfortune that has dogged them throughout this year against the Rockies returned Thursday.

Brandon Drury watched helplessly as Sam Hilliard went above the wall to rob him of a two-run homer in the second inning. Soto lined into a 109-mph double play after Manny Machado walked to open the fourth. By the time something went their way — Soto’s gift triple falling between center fielder Yonathan Daza and right fielder Charlie Blackmon to start a two-run rally in the sixth — the Rockies had a 6-0 lead.

Tough luck had something to do with that, too.

Ryan McMahon’s 110-mph double in the third followed Brian Severn’s 86-mph single and a 79-mph single by Blackmon, both to left field. A 61-mph single from Blackmon and an RBI double that turned around Soto in right set up McMahon’s three-run homer to center on a 106 mph line in the fifth.

All told, Musgrove struck out six but tied a season-high with six runs allowed on eight hits and a walk in his first start since finalizing a five-year, $100 million extension on Monday.

Josh Bell followed Soto’s “triple” to lead off the sixth with a single to right field for the Padres’ first run on just their fourth hit of the game. Wil Myers singled with one out and Austin Nola’s two-out base-hit cut the Rockies’ lead to 6-2 before pinch-hitter Jake Cronenworth popped out in foul ground.

Bell’s groundout to third wasted Soto’s two-out double in the seventh, Myers grounded into a double play after Brandon Drury walked to start the eighth and Soto flied out to end the game after each team scored in the ninth.