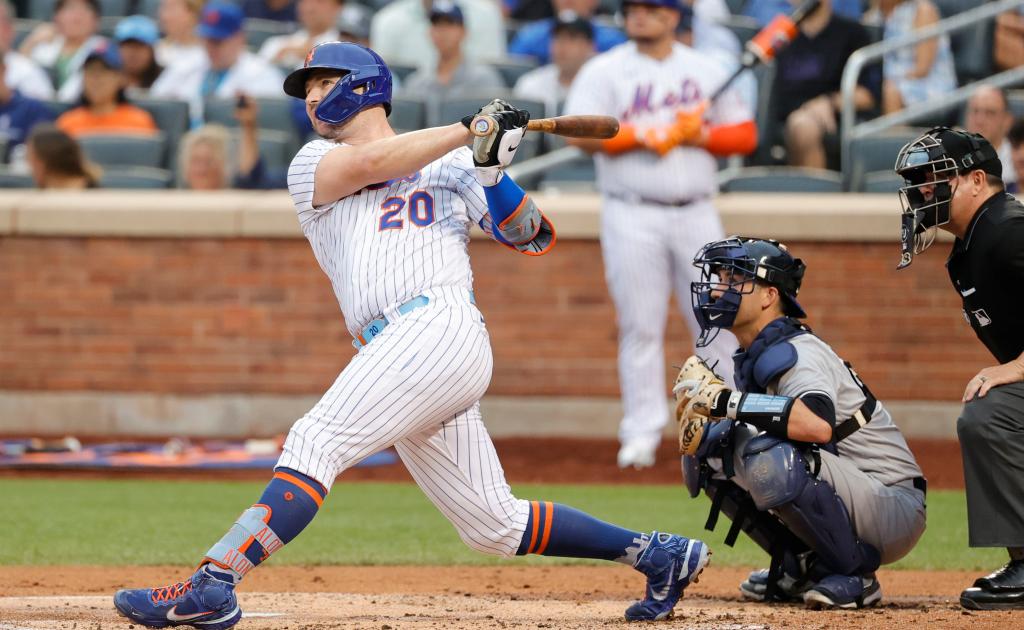 In his fourth and perhaps best season, Alonso finally wants a test that did not arrive in his first three.

“I’ve never played in a major league playoff game before, but if I had to guess, that’s what it would be like,” Alonso said Tuesday, after the first of two Mets victories over the Yankees at a lively Citi Field. “Looking to change that this year, though.”

In carrying a Mets offense that has been inconsistent around him, Alonso has played like he is on a mission. The bigger the situation, the better the Polar Bear.

In the five games out of the All-Star break against likely playoff-bound opponents, Alonso has improved his case that he belongs in conversations with the likes of MVP candidates Manny Machado and Aaron Judge. Against Machado’s Padres and Judge’s Yankees, the Mets slugger went 10-for-16 with two home runs and three doubles, elevating his game when the competition was elevated.

The Mets were down 1-0 in the sixth inning Sunday against San Diego when Alonso — who is batting .319 this season when he steps up in games the Mets are behind — blasted a three-run homer to provide a lead the Mets would not relinquish.

There was no score in the Subway Series finale Wednesday when Alonso sent his 26th homer of the season to left field to give the Mets the lead in a game they would never trail.

The more tense the moment, the louder Alonso’s bat. With runners in scoring position, he has posted a 1.143 OPS, which was fifth-best in the majors in those situations after the Mets had swept the Yankees.

“I didn’t realize how good he was, to be honest with you,” manager Buck Showalter said Wednesday during a season in which Alonso, through several scares, has managed to play 97 of 98 games. “He’s a special performer.”

Francisco Lindor has been better this season than last, but notably streaky. Jeff McNeil’s bat has come and gone. Brandon Nimmo started hot and has gotten cold. Starling Marte started cold in April and has gotten hot.

Up and down the Mets lineup are hitters who have been up and down, except for their one constant. Alonso, who has been drilled 10 times, has never stopped hitting.

“You look at everything Pete’s kind of very quietly overcome — from the car accident in spring training to the hit by pitches in the neck and the head,” Showalter said before the first-place Mets, who were off on Thursday, begin a three-game series in Miami on Friday. “It’s pretty remarkable the consistency he’s had. Just tells you how tough he is mentally.

“This guy’s a competitive guy. He’ll stick his nose in there and compete and live with the consequences.”

Alonso’s season began with what he has described as a near-death experience in Florida, when another driver ran a red light and “T-boned” Alonso’s car during spring training. He was in camp the next day and grateful to be alive.

On Opening Day in Washington, a 95 mph fastball grazed off his shoulder and struck him in his helmet flap, bloodying his mouth. He was in the lineup the next day.

The only game he missed came in early June after he was drilled in the hand by a Yu Darvish fastball.

With consistent at-bats and consistent results, Alonso has knocked in 84 runs, which was the most in the majors entering Thursday. Alonso is on pace for a franchise-record 138 RBIs, which would easily top the current record of 124 that both Mike Piazza (1999) and David Wright (2008) share.

Showalter, in his first season in the Mets dugout, has not seen the evolution of a 27-year-old who has become a star and a better situational and contact hitter. The slugger has lowered his strikeout rate to a career-best 19.8 percent of the time this season.

“I just know he’s been real good this year,” Showalter said. “I’m lucky to have him on our club.”