Having a sip of Diet Coke on a Saturday afternoon, I randomly picked up the iPad mini and started searching for games on Apple Arcade and found Air Twister. From the start, it looked like an arcade-style shooting game and that was enough to pique my interest. At that point, I didn’t know Yu Suzuki was behind the Air Twister, an old-school rail-shooter game. Air Twister is a comeback vehicle for third-person rail-shooters, at least on mobile platforms. For someone who plays video games with zero expectations. Here is my review of Air Twister on the Apple Arcade mobile gaming subscription service.

Who is Yu Suzuki?

Yu Suzuki has had quite an impact on the video games industry. Throughout his illustrious career, Suzuki developed multiple games, which later got cult classic status. In 1983, he joined Sega when the video games industry was going through its worst phase and started developing arcade games. Hang-On was one of the first arcade games he designed for Sega using 16-bit graphics. While Space Harrier was a third-person rail shooter set in a fantasy world, Virtua Racing was his first attempt in the world of 3D polygons.

Then came Shenmue, the first major title he developed for a home console. At the time of its release, Shenmue was one of the most expensive games ever made. The game visuals, story, environment and game elements were far ahead of anything people had played at that time. Yu Suzuki will always be remembered for introducing 3D racing, 3D fighting, open-world gameplay and full-body motion controls in video games. These days, Suzuki runs an independent development company called YS-Net, which is behind the Apple Arcade exclusive Air Twister.

At the core, Air Twister is a rail shooter. For me, Air Twister feels like returning to the roots with a game that has the elements of Space Harrier, Suzuki’s earlier attempt at creating the rail-shooter genre and the third-person fight combat title After Burn. The game features Princess Arch, whose home planet is under threat and she needs to save it from destruction. You are playing this princess, who flies through fantasy environments and destroys stingrays, giant dragonflies and UFOs. While I like the stylised treatment given to the game; it genuinely feels closer to a AAA title with rich visuals, something to marvel at on my iPad mini 6. The music by Dutch musician Valencia, surely is another plus point of the game. It’s a mix of rock, opera, and classical music styles that are in sync with the fantasy shooter. 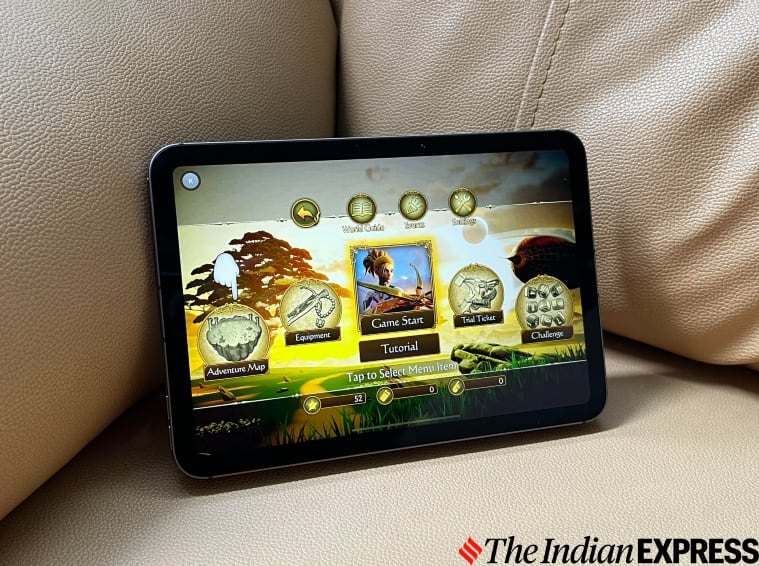 Where the game falters is the weak narrative and the storyline. I don’t know the backstory of Princess Arch; who is she and why she is always on this giant goose. What’s supposed to be driving the narrative falls flat and ends up being a cardboard-like character with no emotions. Maybe I was asking too much from Suzuki and his team but I guess the industry needs to up the game with writing and character-building, especially when female characters are driving the narrative in an action-adventure space.

Suzuki has used a straightforward approach with both storytelling and gameplay with Air Twister in order to have a wider reach among users. Air Twister is a simple game but not silly. You jump straight to the gameplay, like old-school arcade games. You, being a princess warrior, need to zap airborne enemies by swiping away and tapping at the targets to shoot them. Just tap where you want to shoot and hold where you want to move. The faster you destroy your enemies, you will then be rewarded with a star that you can use to get weapons, and cosmetic and health upgrades. The game works best with touch controls, but you can also play Air Twister on the Apple TV box with a Bluetooth controller attached to it. The game has 12 stages and 10 boss fights, each having its own set of challenges. Speed is important here and so is the timing. Should you play Air Twister?

I always feel that a game should be fun, regardless of how simple or complicated it is. Air Twister is not Suzuki’s best work till date, and I get that. The core issue with Air Twister is that it gets repetitive after a while but never tests your patience nor does it get boring. It is a chill game that can be played when you need a little break between work. Air Twister can be played for stunning visuals and music, something you don’t often see on a mobile game.