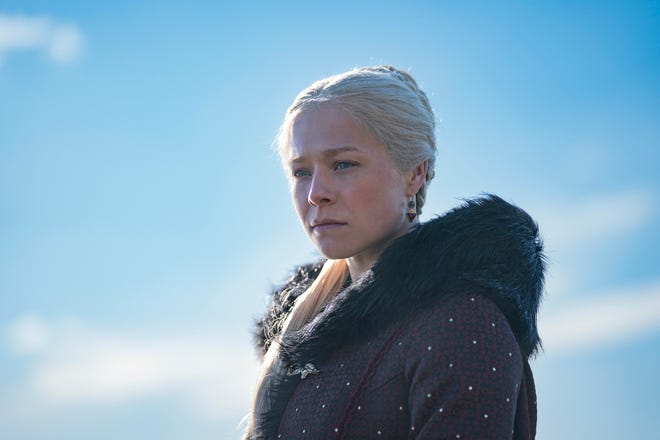 So said executive producer Miguel Sapochnik via a statement at the Comic-Con panel for HBO’s “Game of Thrones” prequel series “House of the Dragon.” (Sapochnik was unable to attend after contracting COVID-19).

If there’s one thing to know about “Dragon,” premiering Aug. 21 on HBO and HBO Max, it’s that it will be absolutely full of the fire-breathing monsters, as advertised. There are 17 different dragons to keep track of at various points in the series, according to executive producer Ryan Condal.

Fire, blood, sex, battles, family betrayals and death are also a part of the new series, which is bringing the fantasy kingdom of Westeros back to HBO, three years after the juggernaut “Thrones” ended. The cast and producers of “Dragon,” along with author George R.R. Martin, promised a crowd of eager “Thrones” fans in Comic-Con’s giant Hall H plenty of the stuff they loved about the old series.

“Nobody wants to do a spinoff show about (a king) who builds roads,” Martin said. “My books are fantasies,  but I do follow history.” He noted “Game of Thrones” “was based very loosely on the Wars of the Roses, while this show was based on an earlier period of English history, the Anarchy.”

Martin was referring to a period in medieval England when the only child of the king was a woman, who was challenged by her male relative for the throne. That plays out in “Dragon,” which features a Targaryen princess, Rhaenyra, played by two actresses at different ages (Milly Alcock and Emma D’Arcy).

D’Arcy talked about how a theme of the show is people not trusting a woman to lead, and she said that still plays out in real life. “We haven’t fixed it,” she said. “We still pick male leaders.”

“I don’t think Westeros is more anti-woman or more misogynistic than real life, or what we call history,” Martin added.

The Comic-Con panel also included series star Matt Smith, a familiar face in the convention hall for his days playing the title character in British sci-fi series “Doctor Who.” He’s playing a significantly less jolly and joyous character this time as Prince Daemon Targaryen, who fights Rhaenyra for the throne. But don’t call him a villain.

“We’re not going to have anyone who is called Lord Evil or Mr. Atrocity, and we don’t have Orcs or Trollocs,” Martin said, referring to the monsters populating Amazon’s rival fantasy series, “The Lord of the Rings: The Rings of Power” and “The Wheel of Time.” “There is certainly evil. The most interesting characters are gray characters. … All of these characters have good in them and evil in them, and it’s about the choices they make.”

Producer Condal agrees. “This series starts at the pinnacle of Targaryen power,” he said. “It’s just before the bloom starts to come off the rose.” But no matter how good things are, “It’s ‘Game of Thrones,’ so everyone has their own desire for power and influence.”

The cast and producers are well aware of the weight on their shoulders continuing one of the most popular TV franchises of all time, and they nervously talked about fans seeing the show for the first time.

“There is a massive pressure to give you guys what you want,” said Olivia Cooke, who plays the older version of scheming courtier Alicent Hightower. “There’s such a legacy. Yeah, man, I just hope you like it.”

‘Lord of the Rings’: ‘The Rings of Power’ storms into Comic-Con with ‘serious’ dwarves, epic trailer