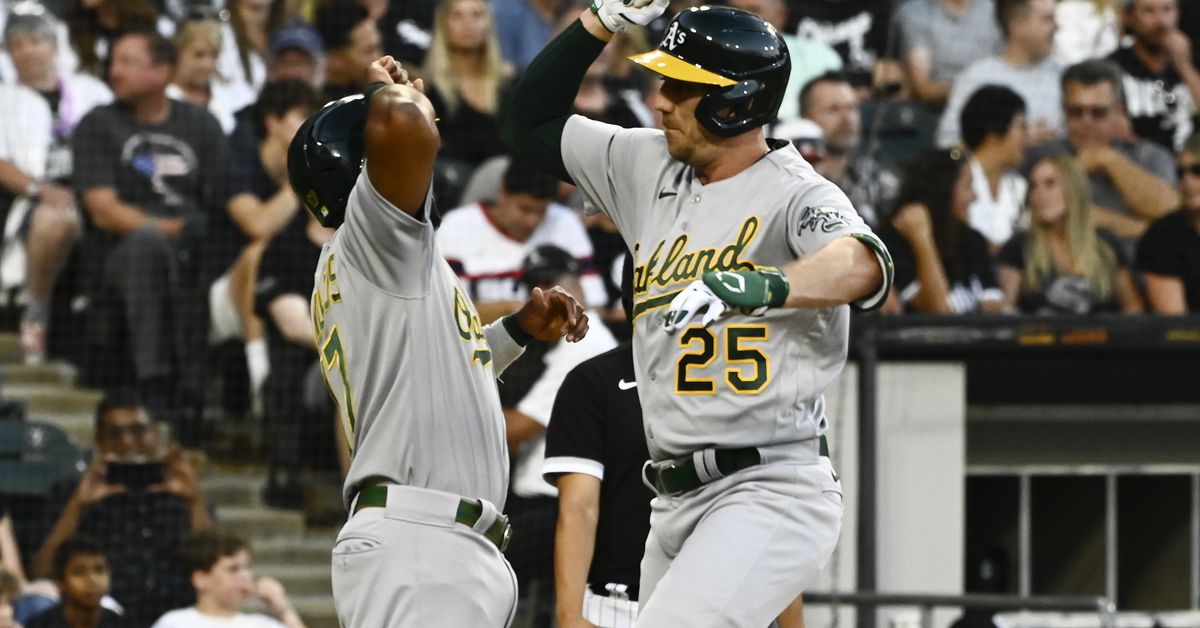 The A’s won their fourth straight game tonight, beating the Chicago White Sox 7-3 in the first game of the series.

Everything went right today. The starting pitching was solid for six innings yielding just a single run, the offense did their damage with four home runs, and the bullpen and defense had some bright moments in this one as well.

It was a very symmetrical game through the first half of this one. Both starting pitchers got jumped on early but then settled down to retire double digit number of batters in a row.

For the A’s that was James Kaprielian. A two-out double and RBI single off the bat of Jose Abreu gave Chicago a quick lead in the first against the right-hander.

The A’s did their own damage the very next inning. After Ramon Laureano and Elvis Andrus got aboard, today’s DH Stephen Piscotty got into a hanger, launching the ball deep into the left field bleachers for a 3-run shot:

And that was it for a while from both teams. Kaprielian retired 11 in a row after the Abreu single while Chicago starter Lance Lynn sat down the 10 A’s hitters that followed Piscotty’s bomb.

Both those streaks ended in the fifth thanks to a one-out double from Nick Allen that the A’s wasted, and a one-out White Sox single broke up Kap’s streak in the bottom half of the frame.

The sixth saw the A’s get a couple big insurance runs thanks to a pair of solo home runs. First up was new-daddy Seth Brown:

This was his first game back since the birth of his child. His son is never going to hear the end of this.

Next up was Elvis Andrus with his seventh home run of the year:

Those two runs would come in handy for Oakland later.

Back to Kaprielian. He was only at 64 pitches through five innings but was getting ready to face the Chicago lineup a third time. He’s struggled doing that this year, and after a leadoff double it felt like the White Sox would score at least one run in the sixth. The bullpen started moving, anticipating getting in there in the sixth.

Not today, said Kaprielian. He stranded that runner at third in impressive fashion, striking out Yasmani Grandal to end the inning and preserve the four-run lead. That was it for Kap as manager Mark Kotsay turned to the bullpen for the seventh.

Kap continues to turn around his season around. He now sports a 2.56 ERA over his past seven starts, during which he’s pitched at least five full innings. His slider was especially effective tonight. He also broke an Oakland-record 26 straight starts without making it through six inning.

Righty Domingo Acevedo came on for the seventh and got hit hard when he yielded a two-run bomb to former Athletic Josh Harrison to cut the lead in half.

And then the A’s got one of those right back in the next inning when Brownie hit another home run, his second of the game:

Again, that newborn of his won’t ever hear the end of this game.

The Green & Gold got another insurance run in the ninth thanks to a pair of singles and an Allen RBI suicide squeeze bunt ground out. He was going for the hit but still collected an RBI for his stat sheet.

Fellow bullpen workhorse Zach Jackson had the eighth and pitched a perfect inning, and closer Lou Trivino came on to seal the win. He did just that, setting down the White Sox in order and getting a couple strikeouts along the way, including one to end the game.

That’s now a season-high four game win streak for these guys. They start off the 6-game road trip in the perfect way with a Friday night win and their All-Star starter set to go in game 2. Paul Blackburn will be hoping to make it five in a row for Oakland tomorrow night.