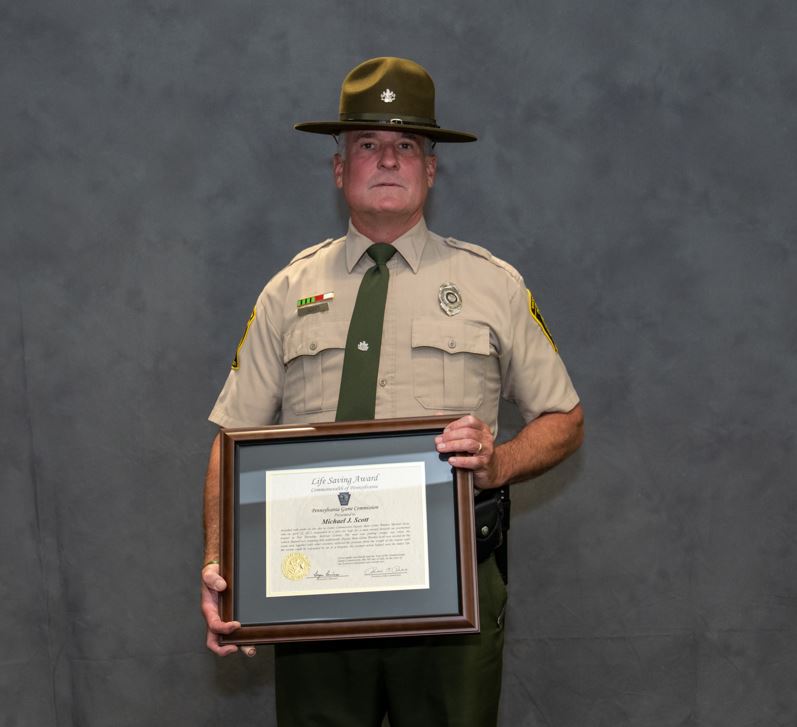 Deputy Michael Scott was honored with the award after he help save a man’s life whose tractor nearly crushed him as it flipped over.

SULLIVAN COUNTY — A Deputy Game Warden in Sullivan County was honored with an award after saving a man’s life.

Deputy Game Warden Michael Scott was presented with a Life-Saving Award in Harrisburg at a recent Pennsylvania Game Commission Board of Commissioners meeting for his efforts in helping to rescue a man whose tractor flipped over onto him while trying to pull stumps from the ground.

Deputy Scott rescued the man who was not only trapped but also severely injured. He said he patrolling when he heard the rescue call come in over the radio. Deputy Scott is also a volunteer with the Elkland Township Ambulance and was not far from the location, so he quickly jumped into action.

As he arrived on the scene, Deputy Scott said two neighbors were there trying to dig the victim out from under the tractor. The victim was awake at first, however, by the time more help arrived, the victim’s condition was deteriorating, as he was suffering from broken ribs and a punctured lung.

Fortunately, due to the quick response and clear thinking of Deputy Game Warden Scott, the Shunk Volunteer Fire Department, and Fire Chief Ed Minnier (who took charge of the rescue effort) officials say, the victim survived the ordeal.

“Mike has been a Deputy Game Warden for over nine years and works tirelessly helping anyone in need. He logs many hours as a deputy, and as a driver with the Elkland Township Volunteer Fire Department and Ambulance. Mike is an asset not only to the Pennsylvania Game Commission but to the local community as well,” said State Game Warden Rick Finnegan, Deputy Game Warden Michael Scott’s Supervisor.

Therefore, due to his bravery and selflessness, Deputy Game Warden Michael Scott received an award he truly earned by helping to save the life of another person in distress.