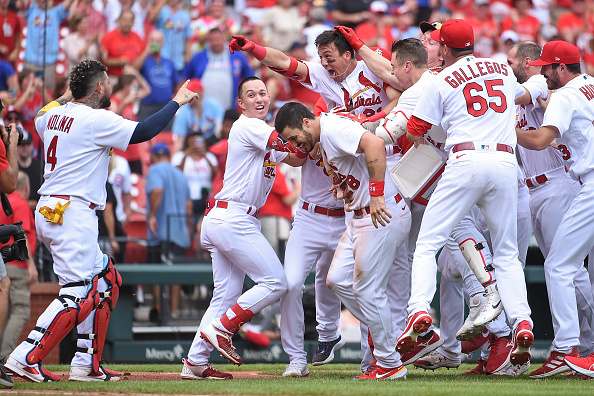 ST. LOUIS – It looked for a while like it was going to be a complete Cubs’ victory to start a long day of baseball at Busch Stadium.

The catcher that wasn’t traded at the deadline was making plays while the starting pitcher for the visitors was holding down the Cardinals for a good part of the afternoon.

But after the seventh inning, things went downhill for the Cubs, and it led to another painful defeat in a season full of them.

Up 3-0 heading into the seventh inning, the Cardinals struck for three runs in the frame then walked off the visitors in the ninth inning. Lars Nootbaar’s single to right off Erich Uelmen was enough to bring home Nolan Arenado for the game-winning run in a 4-3 St. Louis victory.

What looked like a promising afternoon now has the Cubs on the verge of a sweep at the hands of their rivals after falling to 41-62 on the season. Game 2 of the doubleheader will start at 6:45 PM.

Willson Contreras led the charge to get the Cubs to the lead early with his 15th homer of the year in the first inning then started a strong sixth inning with a double. Seiya Suzuki brought him home with an RBI single and the outfielder came home on a sacrafise fly by Patrick Wisdom to make it 3-0.

That appeared to be enough for Marcus Stroman who pitched six shutout innings to start with six strikeouts compared with no walks. But the Cardinals’ lineup got to him in the seventh, with Nolan Gorman and Paul Goldschmidt hitting back-to-back homers to start the troublesome inning for the starter.

Nolan Arenado doubled after that and he would come home two batters later on a sacrifice fly by Nootbaar to tie the game, which ended Stroman’s day.

The St. Louis right fielder would end the game two innings later, spoiling what looked like a positive afternoon for the Cubs.