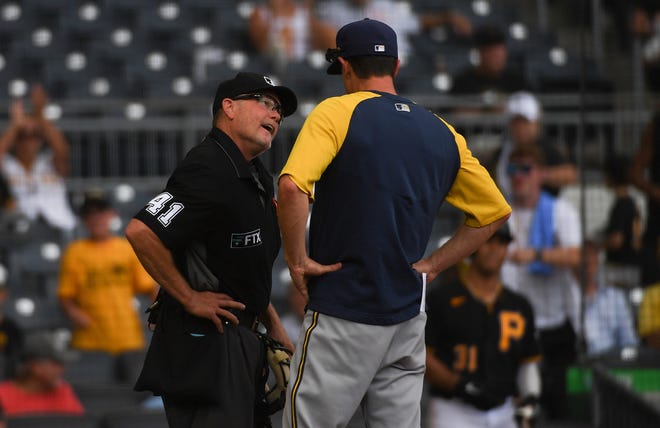 That’s the only way to describe the Milwaukee Brewers’ week.

After trading away all-star closer Josh Hader to the surprise of most of the team, the Brewers were swept in a three-game series by the last-place Pittsburgh Pirates at PNC Park.

The final two losses came via walk-off, including a game-ending wild pitch that scored Bryan Reynolds, who hit a walk-off homer Wednesday night, from third in a two-strike count in the 10th inning of a 5-4 loss Thursday.

Milwaukee fell to 57-48 with its fourth loss in a row.

More:How to watch the Brewers game vs. Cincinnati Reds Friday night via streaming on Apple TV+

Mike Brosseau, getting a rare start against a righthander on the mound opposite the Brewers, sent a go-ahead two-run homer just over the 22-foot tall fence in right field in the fifth. Most of Brosseau’s playing time — 24 of his 27 starts coming in — has come against lefties, against which he has a .953 OPS.

But, as they did in both the first two games of the series, though, the Brewers blew a late lead.

Brandon Woodruff had gotten through six innings with one run allowed despite lacking his usual strikeout stuff but his fortunes took a turn in the seventh.

He walked Greg Allen to lead off the inning, with designated hitter Christian Yelich and manager Craig Counsell getting ejected during the middle of the plate appearance.

Milwaukee loaded the bases with one out in the top of the ninth but, fitting with how their week has gone, Tyrone Taylor’s hard-hit grounder down the third-base line turned into an inning-ending double play thanks to a nifty play by third baseman Ke’Bryan Hayes.

After Devin Williams threw a scoreless ninth not long after seeing his 30-game scoreless streak snapped by Reynolds’ walk-off homer Wednesday, the Brewers manufactured a run in the 10th without a hit. Rowdy Tellez was intentionally walked with the inherited runner on second and two outs, Andrew McCutchen drew another walk and Kolten Wong was plunked to put the Brewers in front.

It mattered none when Reynolds hit a bloop double to open the 10th and tie the game and, with a 1-2 count on Michael Chavis, Matt Bush uncorked a wild pitch to allow the game-winning run to score.