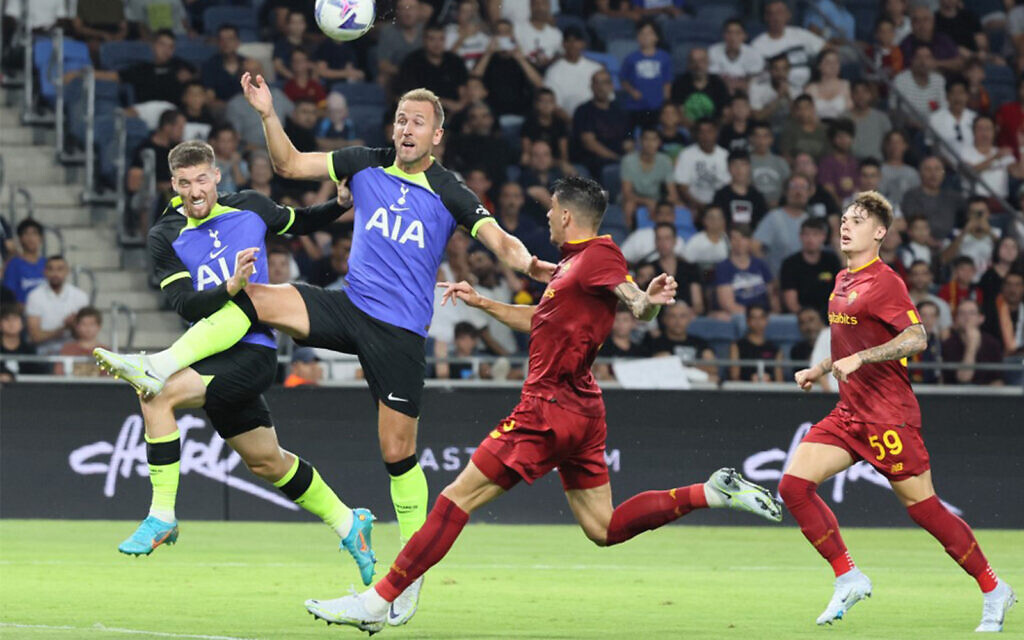 The Italian soccer team AS Roma defeated the English Premier League’s Tottenham Hotspur in Haifa on Saturday, as some of the sport’s top stars made a rare trip to Israel over the weekend.

Roma defeated Spurs 1-0 in a game broken up by multiple water breaks for the players at the sweltering Sammy Ofer Stadium in the coastal Israeli city.

Tempers flared on a number of occasions as Jose Mourinho’s Roma faced off against the British team that sacked him last year in a game that was also briefly paused for a pitch invasion by a fan who tried to take a selfie with the players.

Roger Ibanez scored off a header for the Italian side 29 minutes into the game for the win, even though Tottenham led in possession throughout the game.

Ten minutes later Tottenham’s Harry Kane found the back of the net, but the offside flag was up. Toward the end of the game, Kane appeared to have been brought down in box but the referee decided against giving a penalty.

Around 24,000 fans attended the pre-season friendly match. Both teams are traditionally associated with their Jewish fan base.

Ahead of the game, Roma took time out from its training to visit the Western Wall in Jerusalem, with several of their stars taking the time to pray and place a note at the holy site.

Tottenham, the north London club, has long been associated with its Jewish supporters to the extent that its fans — both Jewish and non-Jewish — eventually adopted the insulting epithet Yid thrown at them by rivals, and became known as “the Yids” and the “Yid Army.” However, earlier this year, Tottenham management said it no longer wanted fans to use the name or chant.

Meanwhile, Roma fans have been subject to abuse from their cross-town rivals Lazio, who have frequently directed antisemitic and Holocaust-related abuse at the Roma fans, most recently posting images of Anne Frank in a Roma jersey alongside slogans such as “Roma fans are Jews.” 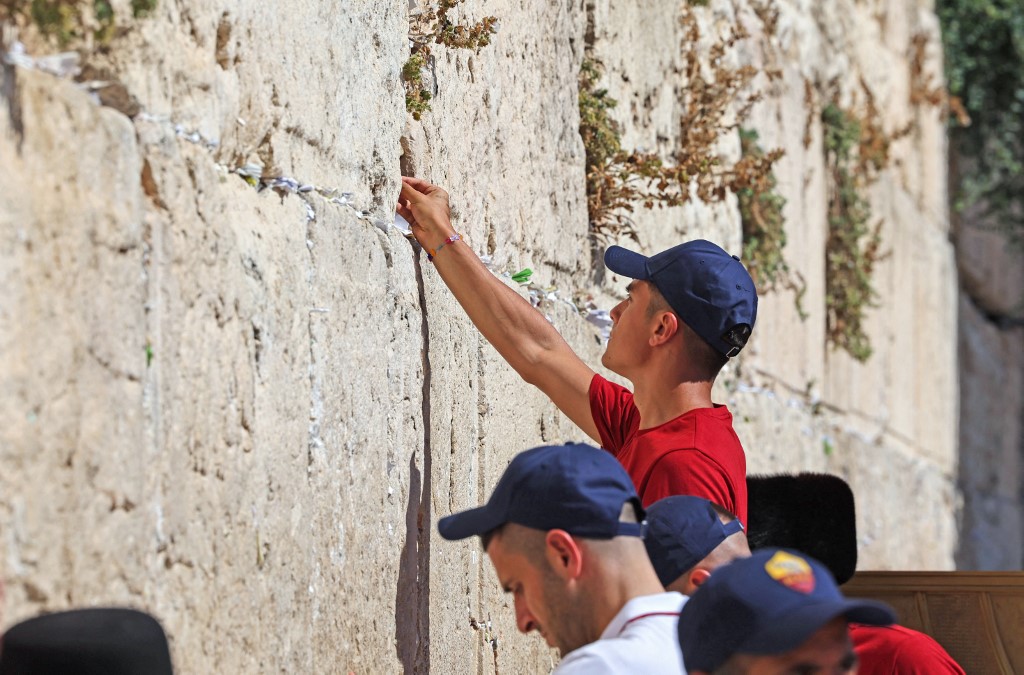 AS Roma’s Argentinian striker Paulo Dybala places a note as he prays by the Western Wall in Jerusalem’s Old City on July 29, 2022 (AHMAD GHARABLI / AFP)

Top soccer teams routinely travel overseas for pre-season games, both to practice against top opposition, but also to boost their commercial appeal by connecting to distant fans. However, games in Israel are rare.

Also Saturday, Lionel Messi and Neymar, two of the sports world’s biggest stars, trained at Tel Aviv’s Bloomfield Stadium ahead of a game on Sunday.

Footage posted by their team, France’s Paris Saint-Germain, showed a handful of fans cheering for the squad during the practice session

Paris Saint-Germain, or PSG, will take on Nantes in the match, which begins at 9 p.m. Around 30,000 spectators are expected to attend. 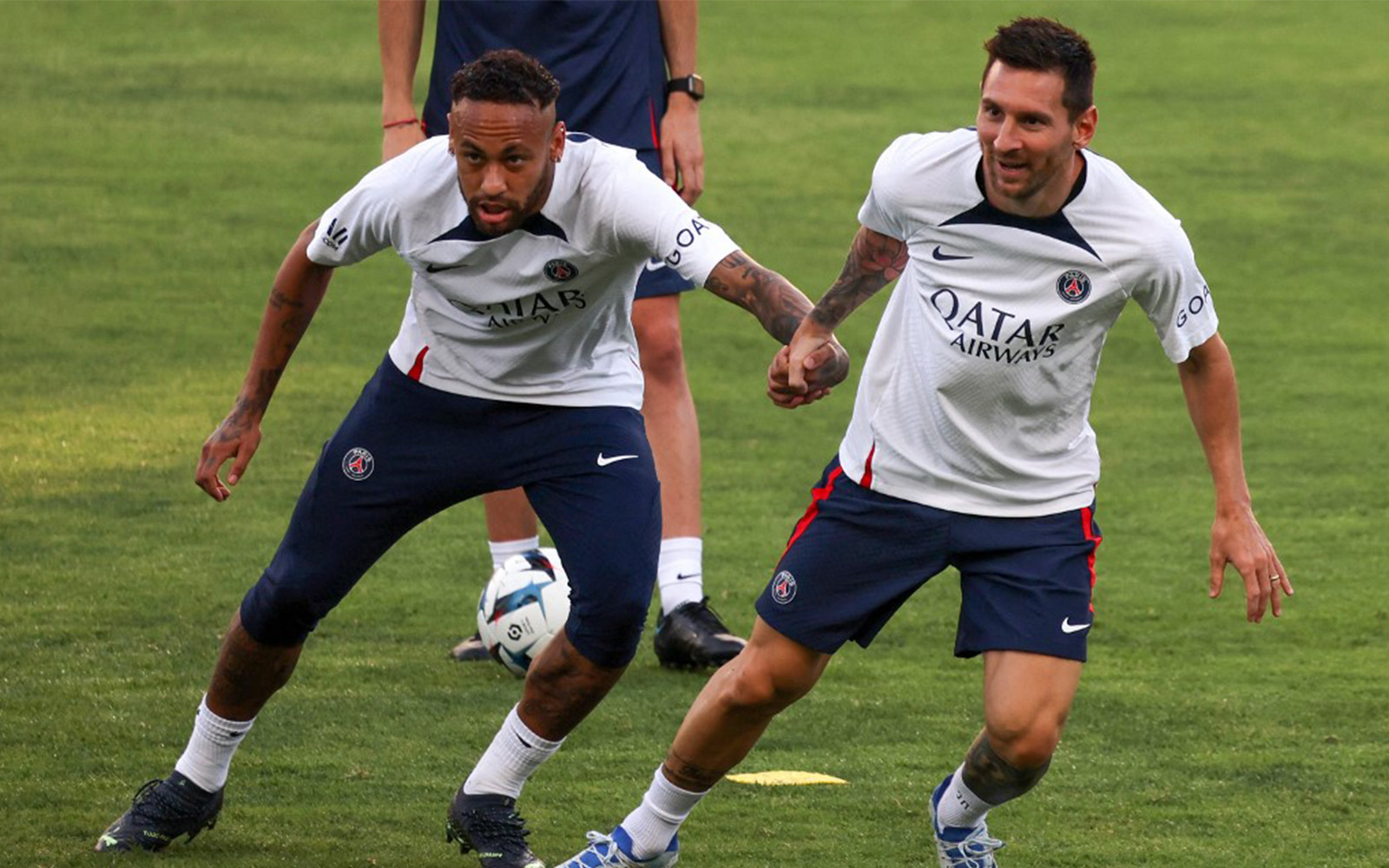 This is Israel’s second year hosting the Trophée des Champions, or the French Super Cup, after the season opener was brought to the Jewish state last year by billionaire Sylvan Adams.

PSG on Saturday met with the Israeli nonprofit Save A Child’s Heart, a humanitarian group that performs cardiac operations on children worldwide. Team members met children involved with the group, signing autographs and posing for photos.

The team also met with Sylvan Adams during the event, who described Israel to the team as a safe and tolerant country.

Messi last visited Israel in 2019 with Argentina’s national team for an exhibition match against Uruguay, but missed last year’s Trophée des Champions game, as did Brazilian Neymar. Messi also visited Israel once before with his former club team, Barcelona.

While the Argentine and the Brazilian will be take the field Sunday, Israeli fans will be deprived of a glimpse of the world’s current most expensive player Kylian Mbappé, who is suspended for picking up too many yellow cards at the end of last season.

PSG have said they will be taking the game seriously after losing last year’s game in a surprise 1-0 defeat to Lille.

Israeli cooking is taking the world by storm. Here’s your chance to join in…

The Times of Israel Community is excited to present our new virtual cooking series, B’Teavon, where world renowned chefs show you how to make classic and modern Israeli dishes.

Already a member? Sign in to stop seeing this

We’re really pleased that you’ve read X Times of Israel articles in the past month.

That’s why we started the Times of Israel ten years ago – to provide discerning readers like you with must-read coverage of Israel and the Jewish world.

So now we have a request. Unlike other news outlets, we haven’t put up a paywall. But as the journalism we do is costly, we invite readers for whom The Times of Israel has become important to help support our work by joining The Times of Israel Community.

For as little as $6 a month you can help support our quality journalism while enjoying The Times of Israel AD-FREE, as well as accessing exclusive content available only to Times of Israel Community members.

Thank you,
David Horovitz, Founding Editor of The Times of Israel

Already a member? Sign in to stop seeing this