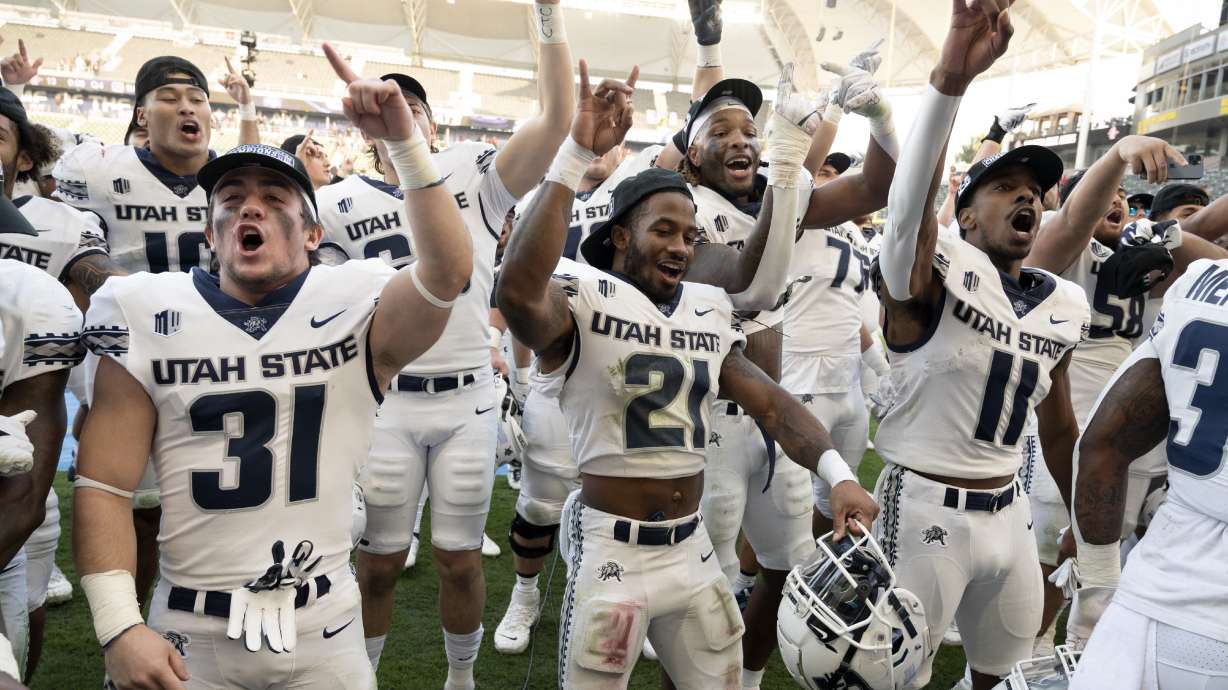 LOGAN — After a difficult nonconference slate, Utah State enters the back portion of its schedule with a 4-2 record and its conference championship aspirations still intact.

Three divisional road games against Colorado State, Wyoming and Boise State will be key, while a late season visit by San Jose State will also be challenging.

Can the Aggies grow as the season progresses, similar to last year, and play their best ball at the end of the year? Or will several tough road games be too much to overcome?

The Colorado State-Utah State game has evolved into a competitive divisional rivalry, with five of the last 10 matchups being decided by one possession or less — the Aggies have won six of the last 10, and three of those wins have come in the past three matchups.

In 2018, Colorado State’s game-winning Hail Mary was called off because receiver Preston Williams stepped out of bounds before stepping back in to catch the ball.

In 2021, the Rams found themselves in position for a game-winning field goal with 12 seconds left to play. With 11 seconds left on the clock, coach Steve Addazio opted to insert his special teams unit onto the field to kick a rushed field goal. Cayden Camper’s kick hooked left and the Aggies held on.

The 2022 version of the Rams is a new team, with former Nevada coach Jay Norvell taking the reigns. On paper, a swath of transfers on the offensive side of the ball, coupled with a strong defensive front returning means they’ll be much more talented than last year’s 3-9 team.

Colorado State may have the talent — and coaching — capable of reversing the Aggies’ good fortune. And with the Aggies on the heels of back-to-back emotional games against BYU and Air Force, a Rams victory seems reasonable.

The Battle for the Bridger Rifle will have plenty of intrigue this year, with former Aggies quarterback Andrew Peasley expected to be QB1 for the Cowboys. Upsetting his former team will be no simple task for the dual-threat junior.

After a mass exodus of 16 players to the transfer portal, including star receiver Isaiah Neyor and star tailback Xazavian Valladay, the Wyoming roster has had to be completely retooled during the offseason. A concerted effort by coach Craig Bohls may have stemmed the bleeding — he brought in eight new transfers, including five Power Five transfers.

The continuity and overall talent from the Aggies side is clearly superior. Also considering the Cowboys spoiled Utah State’s 2021 senior night with a 44-17 upset win last year, there will have plenty of motivation on the road trip.

The Bridger Rifle will return to Logan.

Following the toughest four-game stretch of the season, Utah State gets a much-needed bye week before it returns home to host the Lobos.

Expect the Aggies’ defensive front to feast upon an already suspect offensive line that returns just two starters. It will be an opportunity for Utah State to get its biggest conference win, margin-wise, of the season.

Playing games on the island is never easy. The long trip across the Pacific can be taxing; and traditionally, the home version of the Rainbow Warriors are capable of beating anyone in the conference.

Fortunately for the Aggies, their trip to Honolulu comes at the right time. Hawaii is in complete rebuild mode after Todd Graham’s tumultuous tenure ended with his resignation in January. Former Rainbow Warriors quarterback Timmy Chang is the man tasked with turning things around, but he doesn’t have much to work with after the team was decimated by the transfer portal.

At this point in the season, expect the Aggies offense to be hitting its stride and have too much firepower to be slowed down.

Late November games in Logan are never pleasant, and the war of attrition always plays a factor at this point in the season. This is where returning leadership from last year’s championship squad will pay dividends. The battle-tested Aggies know they need their best effort in order to avoid a second consecutive defeat on senior night.

Utah State will eke out a tough win over the Spartans to set up a Thanksgiving weekend showdown with Boise State.

It’s a 10 a.m. kickoff on Black Friday, and the CBS televised matchup pits the defending conference champions against the team predicted to win the Mountain Division this season.

With a trip to the conference championship game potentially on the line, it could be a defining game of the Blake Anderson era at Utah State.

The Aggies know it, too.

At the Utah State media day in July, plenty in the program mentioned it as a game marked on their calendars.

“I’m just hoping by the time we get there that game really matters,” Anderson said. “I really do. I hope we’ve done enough that that game is critical.”

The bad news is the Aggies have never defeated Boise State on the Smurf Turf. The good news is, if healthy, this Utah State defense has the speed and versatility in the front seven capable of matching up with Hank Bachmeier and the Broncos offense in an attempt to slow them down.

Similar to the BYU game, the Aggies’ offensive line’s ability to match the Boise State defense may be the deciding factor. Expect the senior loaded group to rise to the occasion, and for both Logan Bonner and running back Calvin Tyler Jr. to do enough to pull out the win and send Utah State back to the Mountain West Championship game.